The Leiden Conventions are a system of markers ("sigla") used in modern editions of epigraphic or papyrological texts.

In 1931, classical scholars met at the University of Leiden to arrive at a shared system of markers. Previously, scholars who published texts from inscriptions, papyri, or manuscripts used divergent conventions to indicate the condition of the text and editorial corrections or restorations. The new system, the Leiden Conventions, was published in U. Wilcken, "Das Leydener Klammersystem", Archiv für Papyrusforschung 10 (1932), pp. 211–212.

Despite this attempt at harmonization, variations persisted, for example between epigraphy and papyrology, or between Greek and Latin epigraphy. The markers used in the printed edition Supplementum Epigraphicum Graecum represent one such variant.

With a view to online publication, another harmonization of the Leiden Conventions was introduced, Leiden+ (pronounced "Leiden Plus"). This happened in the context of the Integrating Digital Papyrology project which combined a number of digitized papyrological resources to publish curated editions on papyri.info.

Leiden+ has a great number of sigla, and papyrology is not epigraphy. Therefore, Supplementum Epigraphicum Graecum Online uses a subset of Leiden+. A list is given below. A complete overview of Leiden+, including documentation and examples, can be found here.

All entries in Supplementum Epigraphicum Graecum Online are tagged in Epidoc XML.

Files in Epidoc XML format can be downloaded in the right-hand sidebar in the reader of Scholarly Editions.

Epidoc is a system of structured markup for epigraphic documents and the de facto standard for digital publications in papyrology and epigraphy. It is a subset of TEI.

More information about the EpiDoc Collaborative, its recommendations, guidelines, and schema, can be found on the official site and on Wikipedia.

The "cover image" for Supplementum Epigraphicum Graecum Online visible on the product and library pages is designed by Lara Captan.

Lara is an independent Arabic type designer and typographer based in Amsterdam. She has designed all the covers on Brill Scholarly Editions. You can read more about her work on our covers page.

Click here for a larger version of the cover image of Supplementum Epigraphicum Graecum Online.

The inscription on the cover image is IG I3 4. This is the famous Hekatompedon Inscription, an early fifth-century inscription from Athens of great historical and religious importance, laid out in the stoichedon style.

For the cover, lines 1-11 of face B of IG I3 4 were transcribed using the new Brill Epichoric. This font, specially designed to transcribe early and local Greek alphabets, will be made available to scholars. For more information, contact Pim Rietbroek and check out the Brill typeface on our website.

The letter epsilon was chosen since it is the beginning of the Greek words for epigraphy and Hellenic. 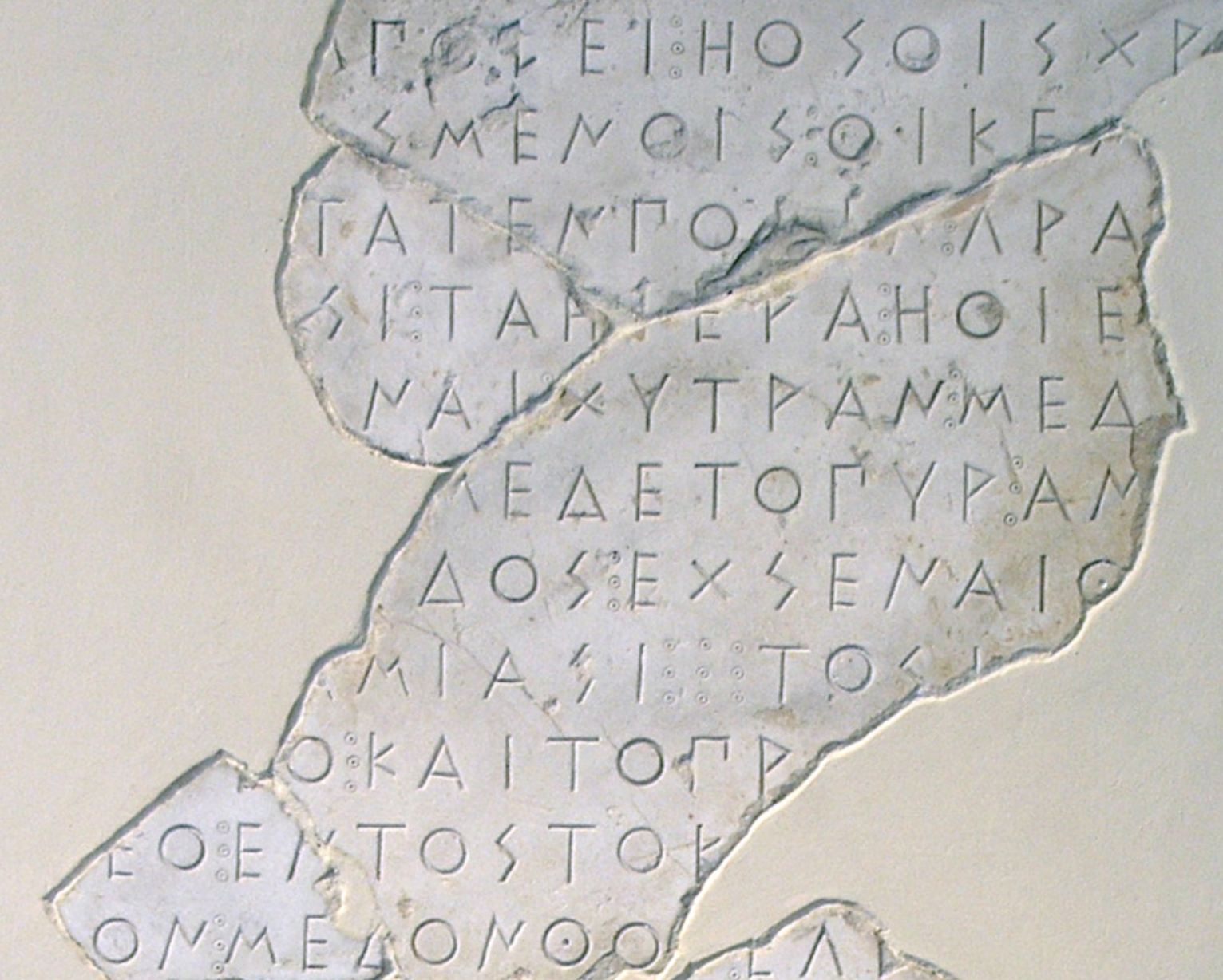 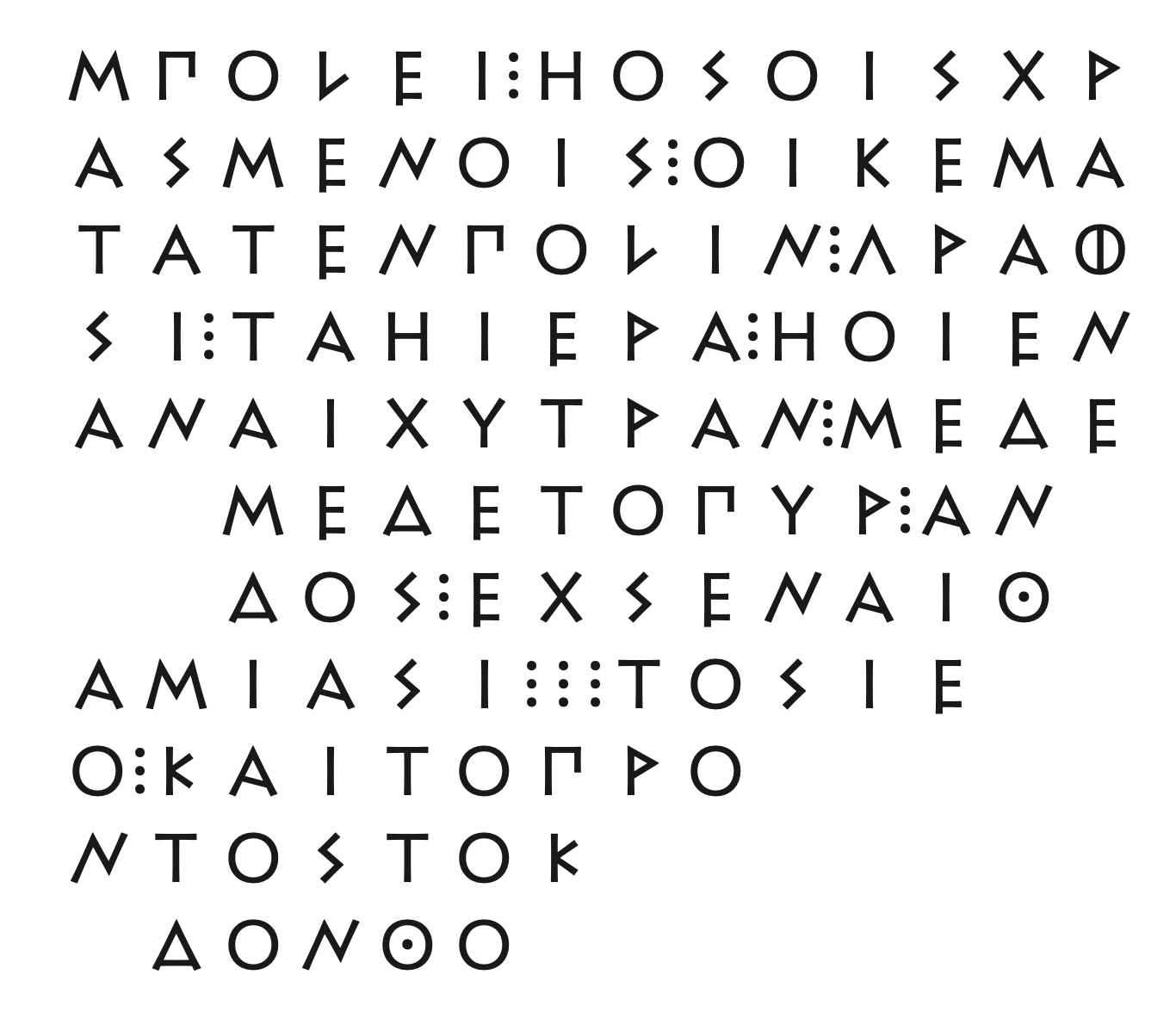 For more information, see the PHI transcription, the AIO translation, and the images on Wikimedia Commons.